The hay has been baled into 330kg round bales. It sat in the field for a couple of weeks to continue drying out in the sun. After baling, rain is no big deal. Round bales shed water well, especially those bound with netting. In fact French farm insurance requires you to leave the hay out for a period of time post-baling in order to dry it out further and reduce the risk of a barn fire.

After the drying time is finished it is time to load up the trailer and bring it all in. To pick up a bale there’s a fork on the front of the loader, or in French a fourche or a pique-balle.

You drag out the trailer and park it on the flat so it doesn’t roll. Then you start loading her up one bale at a time, cringing as you drive over the regrowing lucerne. When the bales are first made you stack them at the side of the paddock but you still end up driving over something good.

The fully loaded trailer takes eleven bales. These are big guys although I haven’t measured them. We use a neighbor who has a fancy computerized baler. I wanted to go with small square bales but the labor load was too high. Turns out round bales are ideal for single-person operations. 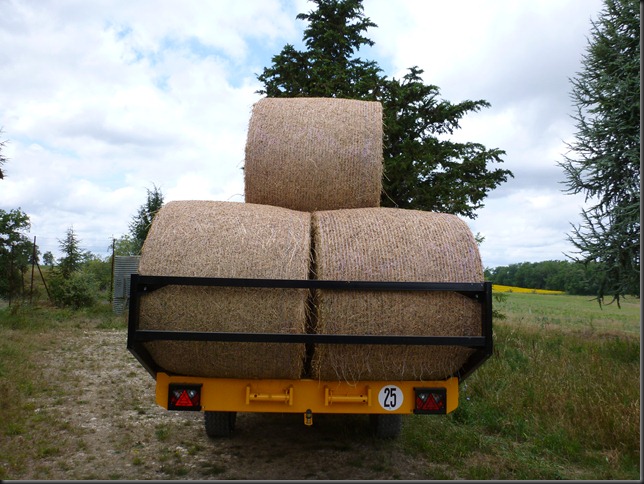 I can bring in twelve bales in one go – eleven on the trailer and one on the fork. The trailer has brakes that run off the tractor’s hydraulic brake system, but it is still a little scary to go down hill or over bumps with three and a half tons of hay on the back. These are second cut lucerne.

The trailer is a Cosnet Uranus and is built like a tank.