About a year ago I visited a friend who has a big cow farm and helped him do his morning rounds feeding the various herds. The photos from this visit just surfaced and reminded me how slack I was in not putting them online at the time. 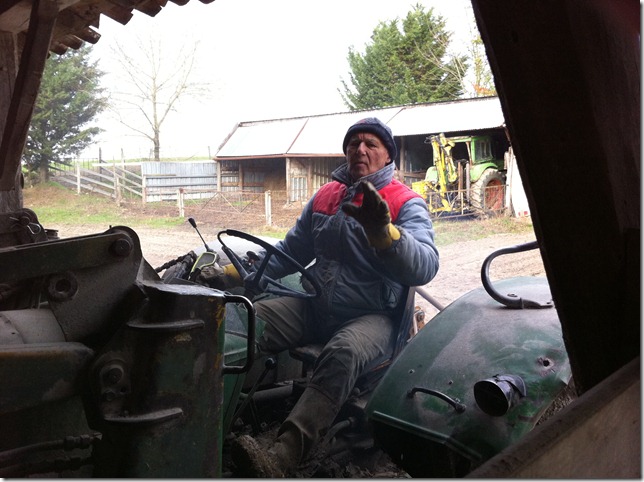 His philosophy is very similar to mine – grass, outdoor cows, low-equipment, low-cost – but his methods were inverse. His herd is divided into smaller herds and they each stay on their own paddock for a long period of time, whereas we run a large herd with the cows moving each day.

He has an agent buy the cheapest rustic calves he can get then has the same agent sell the finished animals on a year later, so he spends little time on that side of the business. His farming style is to spend as little time farming as possible. There’s a couple of hours feeding in the morning then he gets his afternoon’s free barring any fence maintenance. There are no mother cows.

This work ethic has left him fit, active and fast-talking. His accent is Norman so he’s not too difficult to understand. Farming out here keeps you fit: at the time of these photos he was 75. 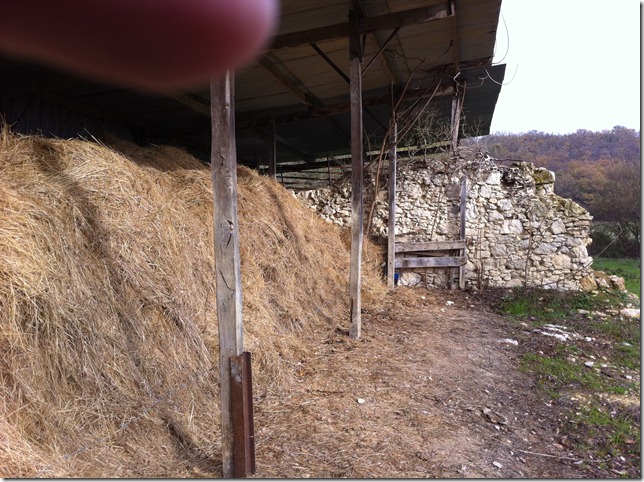 Instead of using hay bales, he picks up the hay in a silage wagon and dumps it out into various sheds, one shed per paddock. There’s a hot wire out in front and each day of winter he manually forks hay out of each shed for the cows. Forget boot camp, hay forking is a full body exercise.

Instead of purchased hay feeders, he uses old steel wheels and bends out the spokes, welding them against another rim to create a feeder. 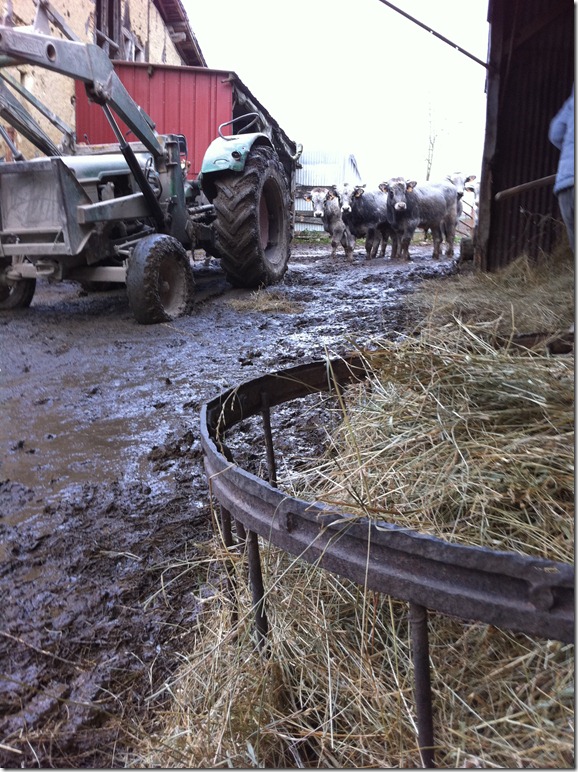 In the photo above you can also see some of his Gascon cows. There are all sorts on the farm but his agent works in the Ariège so the herd is mostly Ariège Gascons.

The tractor he uses most of the time is an old Deutz 2wd with a loader. He’s not losing much money to depreciation. 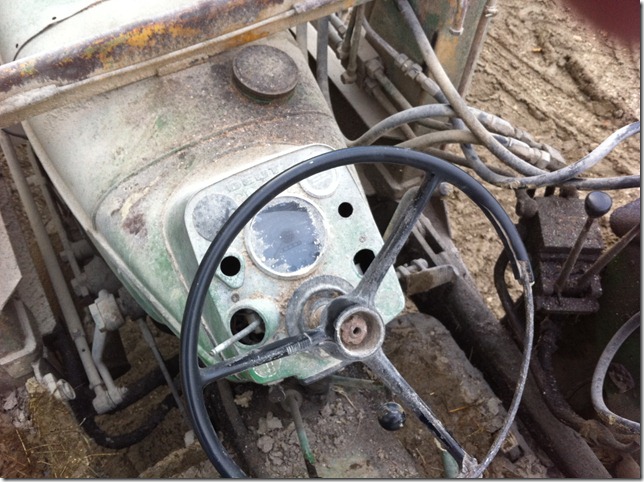 That day he had to move some cows down off a hill into a different paddock. He put a charge of ground corn in the loader of the Deutz and let the cows discover it. That’s a Charolais being bold in front with a lot of Gascons and some crosses behind.

Then he starts to back away, drawing the cows with him. 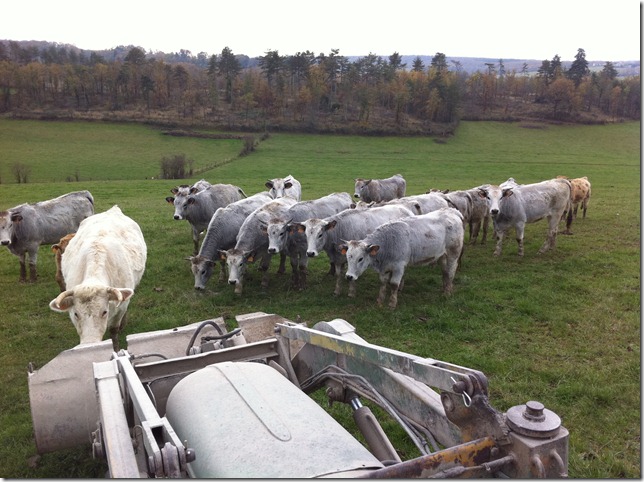 They trot after him as he reverses the tractor down the hill. 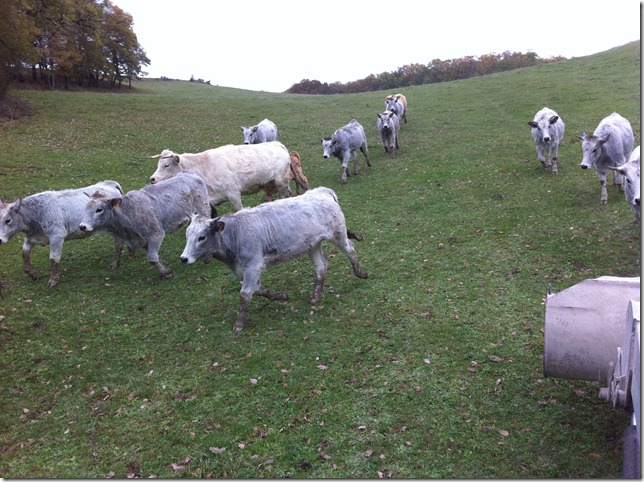 Then they see the feed trough and go running to it. Stimulus! Response! He dumps the corn in the trough to seal the deal. 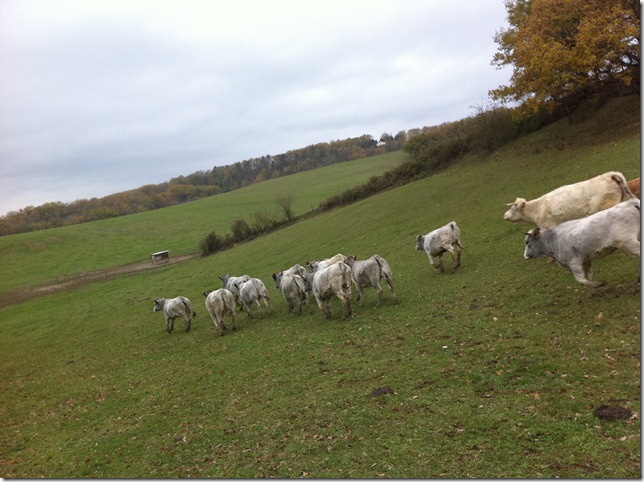 After moving the cows it was time to head back for a cup of coffee. He does have a nice house. 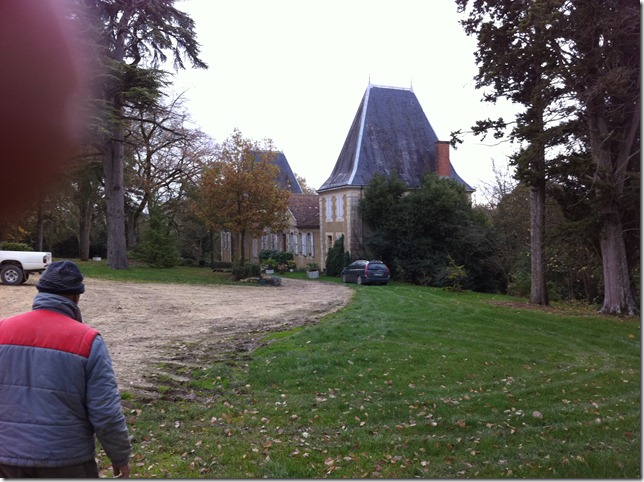 To end the story I think he is retiring now at age 76. The chateau and farm might be up for sale.

7 thoughts on “Moving the cows with the carrot, not the stick”