When we first moved to France we were looking for a nice old farmhouse with a little land. Maybe half a hectare or more of garden and trees with some outbuildings to store junk and for the kids to play in. (Note for fellow Americans: a hectare is two and a half acres, so we started off looking for an acre or more.)

In some cases, the lot was too small. It might have a nice garden but when we saw it as a place for kids to explore it seemed a bit limiting, like we were still in Seattle with a big backyard. The weather might be better but we didn’t move to rural France to live in the suburbs.

Other houses had more space but it was poorly distributed. One lovely old house had over a hectare, but it was spread out in a long line away from the house. It didn’t seem part of the place. Another place had four hectares, but they were to the sides of a U-shaped building and not visible from the main house. They had piggeries on them, breaking up the space. Sure you could remove the piggeries but it didn’t make financial sense – you were paying for that capital only to remove it.

Other houses had a busy road by the front gate that was not mentioned in the adverts or by the agent. When you visited you realized that the photos of the front of the house had been taken by someone standing as far back as possible without letting the road enter the shot. This meant standing in the middle of the road.

The saddest example was near the town of Trie-sur-Baise. There was a glorious old doctor’s house that was in need of a lot of repair and renovation. It was big, listed at 500 square meters, somewhere around 5500 sq ft. 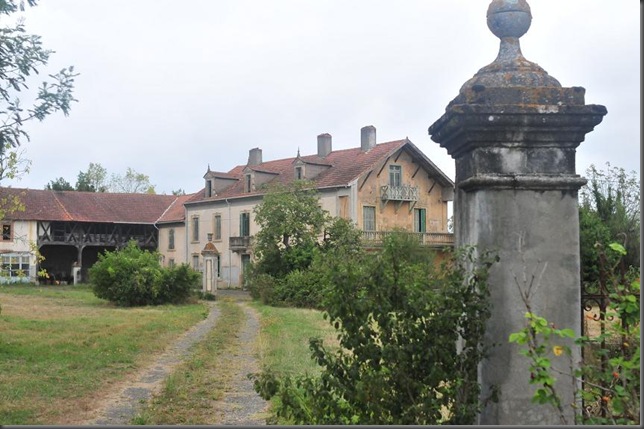 We spent a lot of time going through the details of the house and the work that needed to be done. The old lady who had lived there had done minimal updating as the years went by and the grand house needed a lot of work, and given its size that meant a lot of time and money. Time is something we have a lot of, especially with Clementine going to school in January, so the work did not scare us off.

Houses down here often have issues with damp, and this one certainly did. As was the practice some decades ago they built a concrete apron around the house and channeled the water away to the side. It ended up in a little pond near the house. Another thing they did was strip of the chaux (lime-based render) from the bottom six feet of the facade and put up a cement render. It is the grey strip at the bottom of the photo below.

The old chaux would have had problems with rising damp, and when they replaced it with cement they were putting on something that was more resistant to water. The cement doesn’t breathe as well as the chaux. Since it can’t evaporate out the cement, any water under the house makes its way up the wall and exits above the cement. So you get a lot of wall damage six feet up. 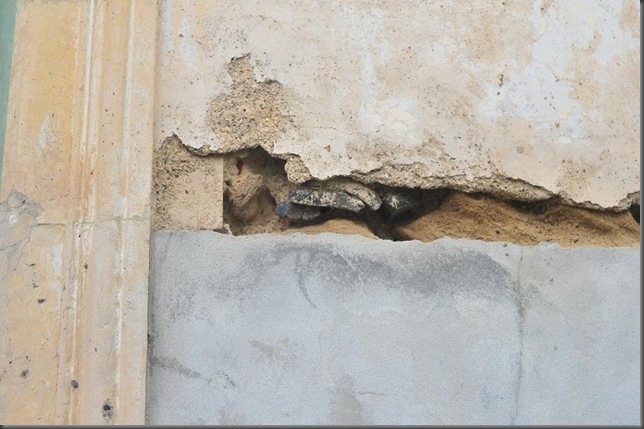 The way to fix this is to remove the cement and replace with chaux, make proper guttering away from the house, get rid of the concrete apron that forces more water into the wall and also reshape the surface of the land to better channel water away from the house. As it stands the courtyard slopes gently towards the house – not good. Even then there may still be periodic damp issues. As I said, this is a lot of work but it is fixable. What isn’t fixable is this:

Common practice in France is for a family to build a second residence on the site, then sell the old residence. It is a great idea when you have plenty of land and want to build a place for your kids. There are tax benefits from doing this, too. You don’t want to do much damage to the value of the old house. If you have a farm you can cut off a quarter hectare without noticing it. But here they cut the 2.5 hectare lot in half and built the new house behind the old doctor’s house.

So would we put the money and effort into renovating this grand old house? We could have spent a couple of years working our way through, renovating room by room and ended up with a lovely country house enlivened by the sounds of the neighbors’ pool. It wouldn’t have given us the full return for the investment we put in.

Nonetheless, it was worth going through the exercise of evaluating this house. Not only did we learn a lot about wall construction and water damage, we also learned a lot about what we value. We like privacy. Any house we buy can’t have neighbors right next to it. Looking back, our Seattle house was unusual in that it was in the middle of a city neighborhood (Queen Anne) yet still had privacy from its neighbors. After seeing this house we modified our criteria to pay more attention to lot layout and neighbors, and we are now looking at houses with more land. A lot more land.

Beautiful sunset.
He’s looking at yah.
Is it a bunny or a chicken ?
Fuzzy cat 🐈
Wild weather🌦
Life is everywhere 🌳