I spent a couple of hours with Gilles, a local farmer who used to run a large dairy herd. In the old days every farmer had a dairy herd and now there’s only one in the commune – maybe twenty farms or more. We discussed the conversion of the old wine chai into a cowshed and he agreed it would work, although there were differences in opinion with other people I’ve spoken with. He thinks the south wall should be open, which is contrary to two others who think the east wall should be open. I did not like his initial idea for a design – a central corridor with a row of cows each side so I showed him what I wanted to do using the open shed outside the current building. This gives about 50% more usable space. He got it. Now I need to go hunting for info on modern cowshed design and adapt it to the needs of SW France and Blondes.

Gilles learned that I’m raising the herd slowly and don’t need a large cowshed for a couple of years until my herd is built up. For the short term he didn’t like the old cowshed with the chains and told me to use the open courtyard and the adjacent barns. This is, of course, my current plan for winter 2011/2. I’m glad he agreed. Here’s the old cowshed:

From another farm, this is a cow chained for the winter. A lot of cowsheds do this. We won’t. 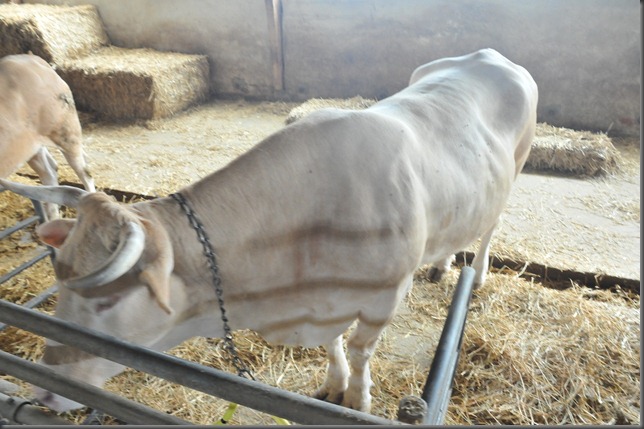 Several farmers have advised me to get an equipment loan and a herd loan. Keep your cash for land purchases, get a loan for the cows and tractor. Given there is a neighboring farm with a lot of land coming up for sale in a couple of years this is sensible advice. Wrapped up in a separate company, this lets the land and housing belong to the family and protects them from business risk. But is there a government-influenced reason? In times of crisis farmers may get loan support and if you have no loan, you get no support. There’s a strong relationship between the banks and the government.

So I’ve been talking to banks to get offers. I’ll see what the terms are. I think rates for French ag loans are low but we will see. Loan term is five years, which coincides with the depreciation write-off period.

All this delays tractor purchase, which delays disking, seeding and fence post hole drilling unless I outsource it. I’ll talk to the local Valtra and Landini dealers when I visit them.

So many little things are getting done but there’s little forward motion.