What do you do with twelve hectares of former vineyard? There are a number of special properties about these old vineyards that you have to take into account. Firstly, you are left with rows and rows of long gashes where the excavator has ripped up the line of vines and posts. Then you have the problem of excess hardware – nails, wire, brackets -  lying on the ground. There can be an excess of copper in the soil from the vine treatments over the years. And the ground surface on hillsides can be terraced, making a very uneven surface.

I wanted to disc in all the bio goodness but we just couldn’t. The risk to cattle of having all those nails lying on the surface was too great, plus the slight terracing of the rows would make hay very difficult to cut and would complicate all tractor work in general. After talking to many vineyard-owning neighbors we did what they did and plowed it all in. 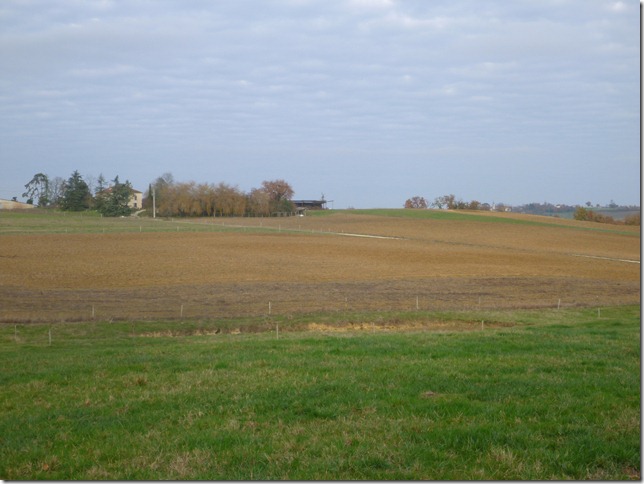 Well, Didier the neighbor ploughed it all in. In a given year we don’t want to plow so it wasn’t worth the cost of acquisition of a plow and the learning curve to figure out how to use it. Plus I don’t want the risk of stress damage to my tractor. Didier used his 130hp machine.

This buries the surface material to a depth of 20-30cm. There likely aren’t a lot of weed seeds in the soil since the vineyards haven’t been plowed in decades, but plenty of weeds will get blown in. I’ll have to disc it a couple of times to continue the contour smoothing and sod breaking process before seeding in the spring. I’m not sure what is going in there but likely a legume like lucerne or red clover and a cereal like oats. There are two main chunks to seed and I’ll do something different in each.

Red clover is supposed to deal well with excess copper and it grows wild on our farm, but I’d rather have lucerne for the better summer performance. Still, I need to rebuild the surface soil so anything that dumps a lot of vegetation will be good. Oats could be grazed directly, leaving the undersown legume or grass to take over. So many variables!

3 thoughts on “Once were vineyards”