Lots of cow butts in the Emerson lucerne paddock. 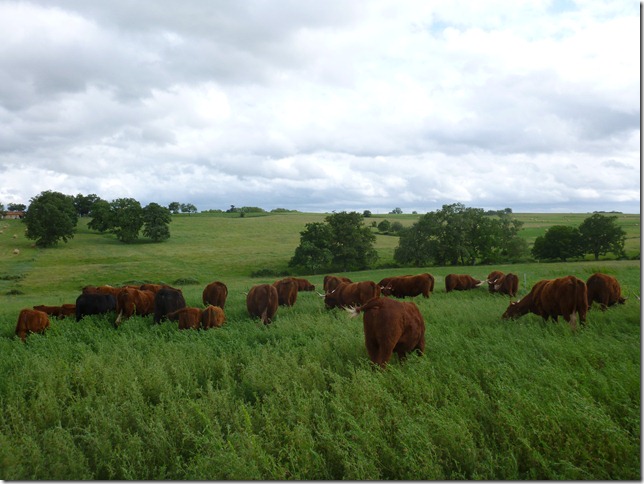 Little G-Unit is one now and filling out. We want to keep her for the cow herd since her mother is Big Cow and is still producing at seventeen years of age. G-Unit looked scrawny at 12 months but is now looking much meatier at 14.

Cow 63 hasn’t given birth yet. She’s big, though. I watch her daily.

Some fine heifers: Leftie (missing her left horn) and 31 the Perfect Heifer, so named because the seller regrets selling her because she grew so well formed. She was one of the youngest when sold and he had no idea how she would turn out. Both of these are for the cow herd although we have to watch Leftie’s left horn to make sure it doesn’t turn back in and start to hurt her.

Cow 78, who is in amazing condition for a thirteen year old cow who just gave birth. She does well on the farm, which isn’t something I can say about all the older cows. Her horns look cool, too. Her calf is called Hermano since he’s the brother of heifer 78 (now called Sandra, named by a friend). Cow 78 is slick and intelligent and fit and puts on condition well.

Gremlin is our young bull. He’s the black taureau with short horns below. He has just been put in with the girls and is doing his job, but gets pushed around by some of the more dominant cows. He’s growing fast and it won’t be long before he outweighs them all. He’s also a very calm bull, but I never go in with the herd without a ski pole just in case. The local saying is, ‘Treat your bull like the Gendarmes.” I think this means ‘”give them respect and a little distance” and not “engage in a high speed chase”. 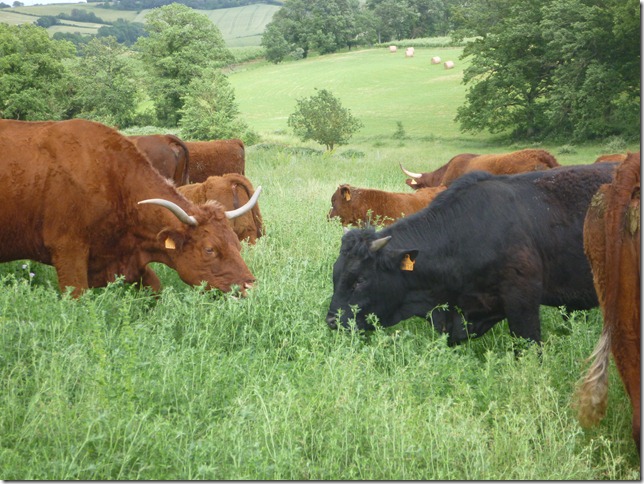 The lucerne here is at about 3% bloom so is a much lower risk of bloat than a younger legume. Still I move them twice a day and check them more often than that. These paddocks had lucerne in them when we bought the farm and they were seeded pure. They are old enough now that grasses have spread into the lucerne, but after the first time round the lucerne dominates. The new fields we have seeded this spring are mixed orchard grass (cocksfoot or dactyle) and lucerne to give some variety and lessen the bloat risk further. Orchard grass grows here in summer so later grazings still have grass to give the cows a mix of food.

8 thoughts on “Cows and Lucerne in Emerson”