This is Richter, ten months old and he’s one of the two bulls we’re using this year. He’s a very calm guy who likes to be hand fed hay or grass. He’s young now but will be able to work by summer.

He’s named after the scale although I could have used Sviatoslav since I always kinda liked his piano playing.

We’ve got Richter and co-bull Wookie in with the herd because there are a couple of heifers that could do with getting knocked up at the moment. If the boys are able to get them pregnant then cool, if not no biggie. We’ll take them out at the end of the month and keep them out for a while to time the breeding cycle for the cow herd. We could take out the 20-month-old heifers and keep them in a separate herd with the bull but I’d rather just wait and synch them with everyone else if they don’t take now.

The 2013 calf crew look good. Here’s heifer IB is OK (a reference to Imperial Beach, Jean’s old hometown) in a photo that was taken a couple of months back. 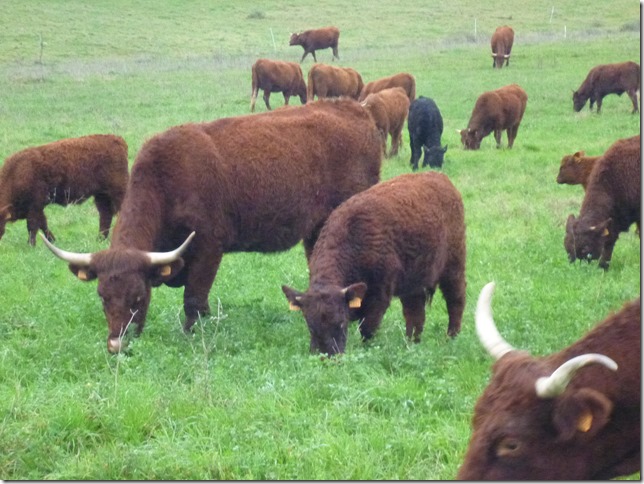 This might be a blog about a farm, but it is a French farm so you get to hear about France too. One of my favorite radio stations here is Nostalgie which plays classics. And why would I listen to this while on the morning commute to drop Lucy off at the school bus stop? Because I get to hear old French stuff for the first time, like this Yellow River re-do by Joe Dassin:

Now Joe was born in New York City, but his style was international.

One thought on “Playing with my bulls”