After the failed bid on the House at Pig Corner we spent months looking around. We saw so many awful houses. Nearly every house we saw was bad: bad houses are hard to sell and spend years on the market. These houses might have been on a busy road, or had awful renovations or water damage, but for me the killer was having a bad lot. So many otherwise good houses failed because of their lot. For example, the second good house we found:

This newish chateau-looking house was amazing. Built around 1968-1970 it had plenty of space and it looked hilarious from the outside. There was an entire unfinished level that was a basement to the house but at ground level on the sunny South side. Lucy wanted the room in the West tower. The price had started out around 500 000 euros but the owner was dying and the price dropped and dropped. The owner had to sell before he died to avoid inheritance issues.

The house had a hectare of land. But effectively there was only the small, sloped garden that you see in the photo above. The rest of the land was off to the sides and down a steep hill. The soil was terrible and it would take ages to get something useful growing there. There was a big field right in front of the house but it belonged to the farm next door and they wouldn’t sell it. And the silly thing was that it reminded us too much of our old house in Seattle. It didn’t look like it from the outside, but the layout was similar with a big bedroom suite for the parents. It had radiators, modern wiring, built-in dishwasher, multiple bathrooms and a huge verandah with a view down the valley to the Pyrenees. But we didn’t move out here to live in a modern house. We had that back home. We wanted an old farmhouse with land around it. Something that you have to learn how to live in, and that surrounded you. This wasn’t it. 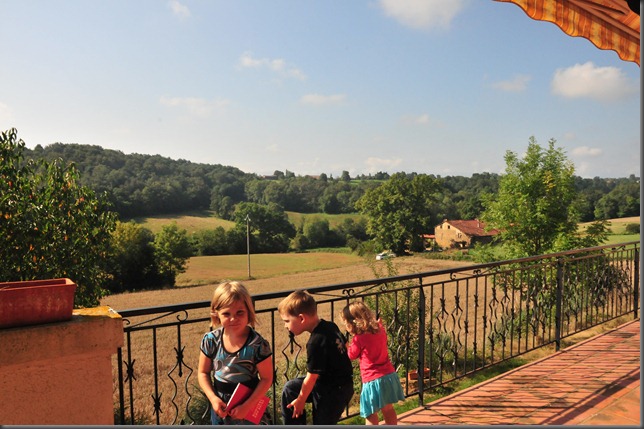 5 thoughts on “The Nouveau Chateau”

Is it a bunny or a chicken ?
Fuzzy cat 🐈
Wild weather🌦
Life is everywhere 🌳
Hot day, hot chicken.
Walking the dog 🐶#golden_retriever