We found one more good house before we switched direction, and it was a big one – 500 sq m (that’s about 5500 sq ft in US measurements). That’s a house with more square footage than the standard lot size in Queen Anne, Seattle. It also had a long line of barns and was in a lovely part of France.

I drove into the village and there it was, this big maison de maître with balconies and dormers. I said to myrself, ‘Holy cow, is this the house they meant?’ 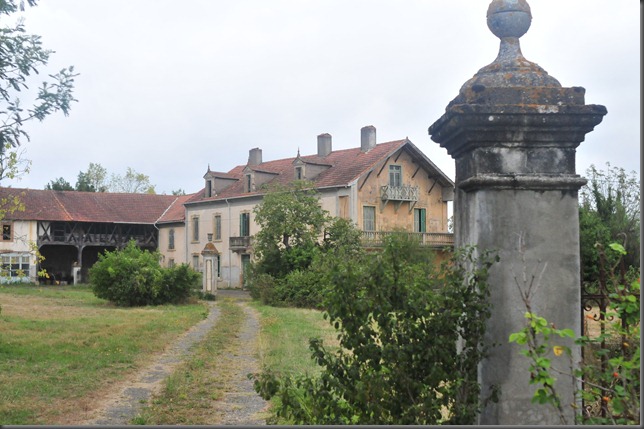 The house had the same basic layout as most other houses I had seen, with a central hallway and rooms off that, but had an extra set of rooms at each side. You had to walk through the inner set of rooms to get into the outer set. It had five windows across instead of the usual three, plus an extra annex on the West side. The house was so interesting I’m going to publish a few extra photos.

There was a fence made out of iron railings at the front border of the property with grand pillars either side of the gateway. The gates themselves were in the barn. There was another iron fence with another gateway enclosing a courtyard in front of the house. This place was a doctor’s house and must have been expensive to build.

This house had a lot of what we were looking for. It was a little too large, and therefore it would have been expensive to renovate, but what a huge old place! It had a hectare of land around it, and the land was good pasture land. The rooms were big. The village was pretty with the market town of Trie sur Baïse near by. Otto liked it.

One big problem the house had was water. This is common to most houses we saw. The stone walls suck up water via capillary action and it leaches out of the walls. In most old houses here you see staining and damage on the lower couple of feet. One method people used to ‘fix’ this was to patch the house with a concrete layer and put a concrete pathway around the house, like a protective apron.

The problem with using concrete on a stone and plaster house was that the concrete didn’t breathe to the extent of the old materials. So the water just kept wicking up the walls until the concrete stopped then leached out there. This concentrated the damage at the level just above the top of the concrete surface. See the following photo where the plaster has detached from the wall: 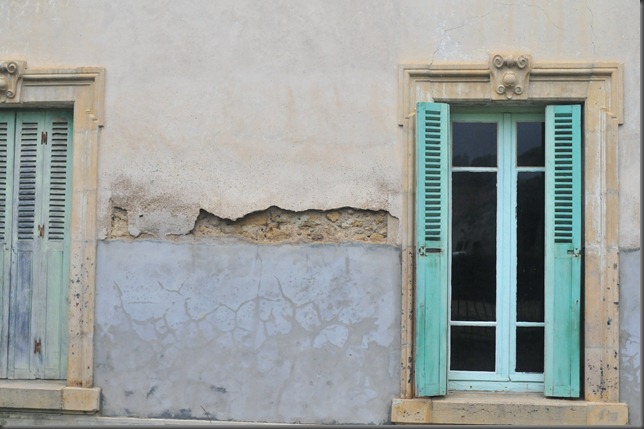 So many SW France houses went through this concreting back in the 50s. It hasn’t worked out too well. Nowadays they have gone back to the original materials.

This house had a couple of big fireplaces. This one was in the lounge. I love the inglenook made from old car seats. You can imagine the old couple drinking their Armagnac by the fire when it was the middle of winter. You can see the wealth of the occupants had dwindled since the times of the original doctor in the 1850s. Now you have car seats in the lounge room:

Whereas up in the attic was the original maid’s room:

There were several fireplaces, each with a different color of marble: 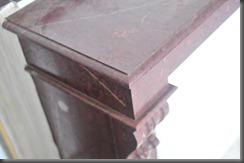 As with all the old houses, there was a well outside.

The barn had a store of tiles for when you needed a replacement. [Note: This photo became the banner image for wobbly.com.]

The upper floors of the old barns were built on huge old beams. You just can’t find lumber like this today. Unless, of course, it is recycled from an old barn.

But why didn’t we buy it? The size of the house implied a lot of work and the water issue also needed investment, but the problem that affected us the most was the lot. Originally this was a two-hectare lot with a good amount of land all around the house. Then the new generation of owners didn’t want to renovate the old house so they built a new modern, warm one beside it and cut the lot in half.

The pool of the new house is behind that hedge. If you’re going to invest in fixing up a grand old house then the land has to match. In cutting the lot in half, the owners did a fair amount of damage to the value of the house. The upstairs windows of the old house looked over the new house and its pool and garden. I get frustrated by things like this. At least the people who made the decision are paying the price. The house had been on the market for a couple of years at 240,000 euros and we weren’t going to buy it.  Still, I hope someone bought it and cleaned it up. 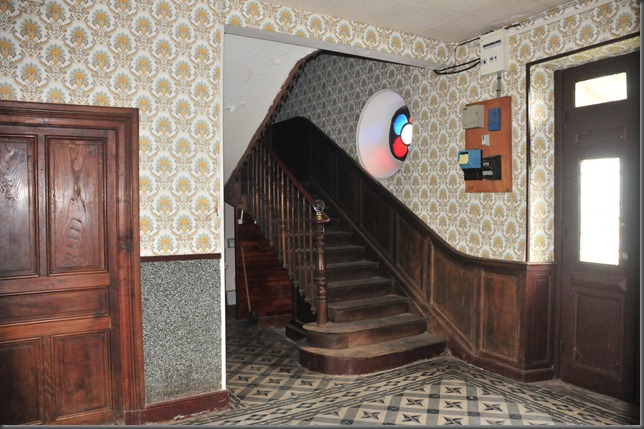 I wouldn’t have picked that wallpaper to go with those tiles.